Come see an amazing Marilyn tribute show, starring Nadine Banville.  She is the star of Reliving Marilyn, this is your chance to see her live. 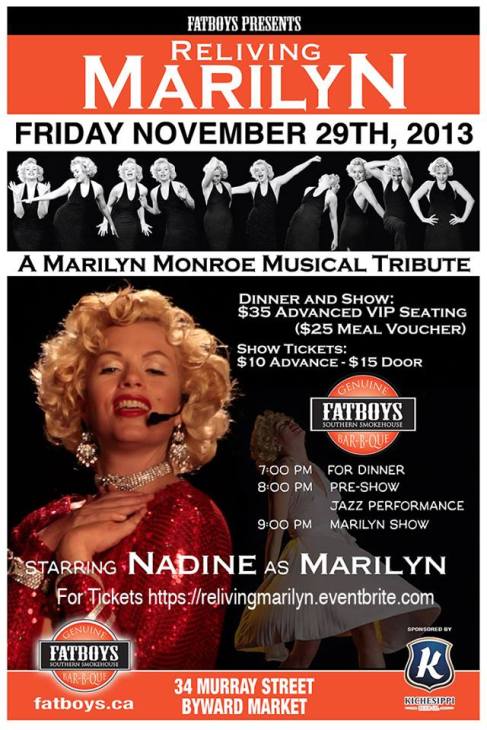 The August 1st long weekend found us in Niagara Falls (Canada side) to shoot the first three scenes of Reliving Marilyn.

We shot both at the top of the Falls, and by the river a few kilometers downstream.  All of the footage looks amazing!

Here is Willow and the crew setting up for the first shot: Scene 25. 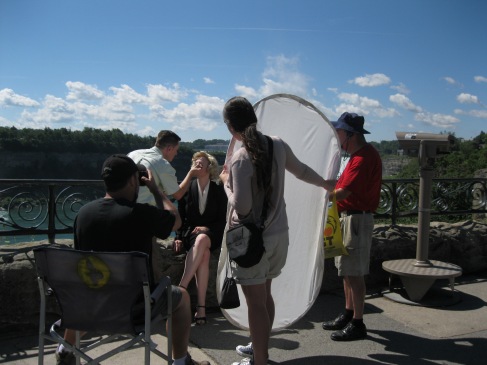 I mention Willow specifically, because the clever boy wore a “security shirt” in bright red.  No-one noticed that it was from the Ottawa Folk Festival, they just saw SECURITY on the back.  As a result, we had a huge cleared space to work in!

Here, Brad (our cameraman in Niagara) waits to film Nadine as Marilyn, with Morgan in the foreground photographing her.  Does she ever look awesome!

A shot from one scene (Scene 27?) where Nadine has absolutely captured the essence of Marilyn!

We have now filmed three scenes for our epic film: Reliving Marilyn.

We all journeyed to Niagara Falls on the August long weekend, and (with the help of our  dear supporters at indiegogo) we shot some amazing scenes with both the Cdn and US falls in the background!

And it’s not too late to get involved.  You can donate via Paypal.com using the relivingmarilyn.com email address.

Nadine Banville as Marilyn, Testing clothes and location for “The Misfits” scenes.

The push is on! Indiegogo is live!.

via The push is on! Indiegogo is live!.

Please note that there are two new acts added to the bill: Elvis and Charlie Chaplin!

There are also more draws, munchies and surprises! 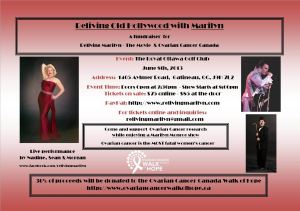 Tickets are going fast!  Get yours HERE, or donate HERE.

Tickets for the Reliving Old Hollywood Team for Ovarian Cancer Canada’s Walk of Hope, and “Reliving Marilyn” (the movie) are on sale through Paypal.

The show will showcase Nadine as Marilyn Monroe in a live performance, have draws for prizes, free nibbles, an opportunity to get your photo taken with a star, and swag to take home.  And you can get a tax receipt for 30% of your ticket price.

And that’s not even all, but I’ll keep some things secret for now.

What’s a little secret between friends? 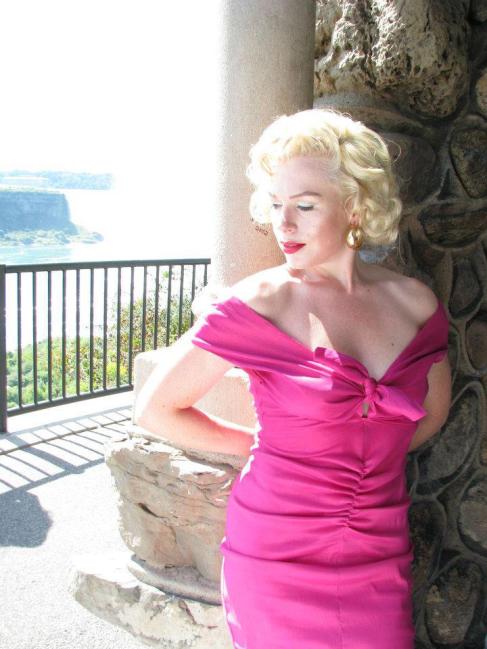 Or HERE if you can’t make it, but still want to help out.